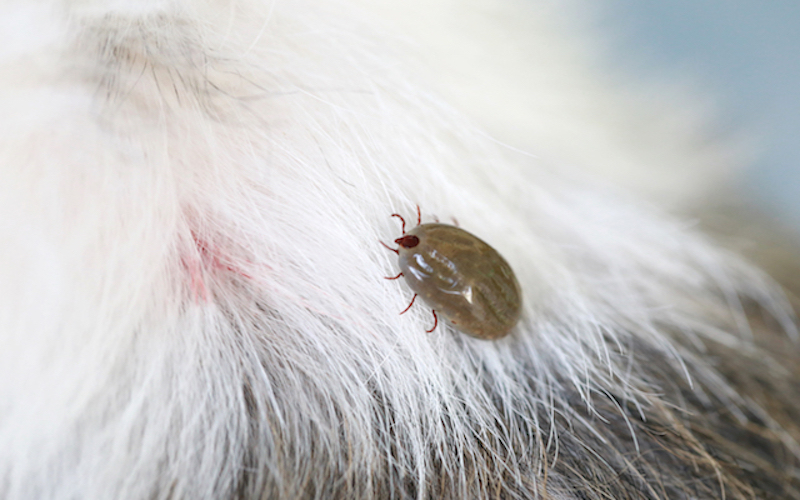 Spring and summer in our area mean tick season. Even dogs  and cats that spend only brief periods of time outdoors can be susceptible to ticks. It is very difficult to avoid your pets’ exposure to these pests, and even careful inspection after outdoor activities can fail to locate ticks on them.

Because of this, it is very important to use tick control products on your pets. We recommend Frontline®, and it is available at all of our hospitals. We also strongly recommend an annual ‘SNAP®’ test for your dog that screens for Heartworm, Ehrlichia, Lyme Disease and Anaplasmosis. This test is simple and can be performed right in our office with results available in just a few minutes.

While the bites themselves cause only mild local irritation, ticks can carry several diseases that pose a serious health risk to both pets and humans. These include Lyme Disease, Ehrlichia, Rocky Mountain Spotted Fever, and Anaplasmosis. Severe tick infestation can also cause anemia. These diseases cannot be transited from a sick pet to humans, but humans can contract them from tick bites.

Lyme Disease is caused by a spirochete (type of bacteria) carried by the very small deer tick (Ixodes scapularis). Once exposed to the disease, many dogs will not show any overt symptoms right away. If untreated, signs of arthritis (limping, joint pain) and changes in temperament may be noticed. Long-term illness may lead to kidney disease, as well. There is now a canine vaccine against Lyme disease that is available at all of our hospitals.

Ehrlichia is caused by bacteria that infect and live within the white blood cells. Early signs of Ehrlichia can include listlessness, lack of appetite, enlarged lymph nodes and perhaps fever. Most dogs that are treated in the early stages of this disease will recover fully. If untreated, the initial symptoms subside, and the animal may appear normal, but the bacteria is still lurking. This phase of the illness may last for months or even several years. Following this stage the disease can enter a chronic phase which may result in arthritis, a deep inflammation in the eyes, and abnormal bleeding.

Anaplasmosis may cause symptoms including fever, lethargy, malaise, anorexia, and general muscle pain resulting in reluctance to move. Other less commonly observed signs include vomiting, diarrhea, or respiratory signs such as coughing and labored breathing. The most frequently observed symptom in dogs that would alert you to Anaplasmosis infection are joint pain and lameness. The disease is commonly confused with Lyme Disease. The best defense against Anaplasmosis and other tick-borne diseases is using a tick repellent such as Frontline®.

Rocky Mountain Spotted Fever (RMSF) was first recognized in humans in the 1930’s but, was not recognized in dogs until the 1970’s. Most cases of RMSF in dogs are reported between the months of March and October, coinciding with the prevalence of ticks in the environment. Most infected dogs are less than 3 years old and have had a recent history of exposure to a tick habitat. Symptoms of RMSF can be a low grade fever, swelling in the scrotum, ears, or joints. While the disease is generally thought to be self-limiting and of approximately 2 weeks duration in dogs, recent evidence has shown that untreated RMSF may lead to chronic illness and may even be fatal to the affected animal. Learn more about Rocky Mountain Spotted Fever here.

To remove an attached tick, use a pair of fine-tipped tweezers or special tick removal instruments. These special devices allow one to remove the tick without squeezing the tick body. This is important as you do not want to crush the tick and force harmful bacteria to leave the tick and enter your pet’s bloodstream.

Grab the tick by the head or mouth parts right where they enter the skin. Do not grasp the tick by the body.
Without jerking, pull firmly and steadily directly outward. Do not twist the tick as you are pulling.
Using methods such as applying petroleum jelly, a hot match, or alcohol will NOT cause the tick to ‘back out.’ In fact, these irritants may cause the tick to deposit more disease-carrying saliva in the wound.
After removing the tick, place it in a jar of alcohol to kill it. Ticks are NOT killed by flushing them down the toilet.
Clean the bite wound with a disinfectant. If you want to, apply a small amount of a triple antibiotic ointment.
Wash your hands thoroughly.

Once an embedded tick is removed, it is not uncommon for a welt and skin reaction to occur. It may take a week or more for healing to take place. Be sure to monitor your pet closely for any of the symptoms mentioned above, and if any of these occur, make an appointment to bring your pet in for one of our veterinarians to examine them promptly.